Opportunities to stockpile adequate personal protective equipment (PPE) for nurses and other staff ahead of the pandemic were “missed” and some items distributed to the NHS and social care during the peak of the crisis did not meet the government’s modelled requirement, a new report has revealed.

“The supply of protective equipment in social care was woefully inadequate”

Unions said the report brought to light a “catalogue of errors” made in these crucial early stages and confirmed that for social care staff in particular, the supply of PPE had been “woefully inadequate”.

However, the government described the analysis in the report around PPE as “misleading”.

Published today, the document covered measures and actions taken on issues such as testing, PPE and expanding the workforce to meet the demands of the crisis.

Concerns have repeatedly been raised over recent months around the supply and provision of PPE for all health and care staff working during the pandemic.

At the start of the outbreak, the only central stockpile, held by Public Health England, was designed for a flu pandemic and lacked items such as gowns and visors.

An independent committee advising on stockpile content had recommended in 2019 that such items should be included, however the report confirmed this did not happen.

Based on modelled PPE requirements from 20 March to 9 May, which looked at the “reasonable worst-case scenario”, the central procurement route set up to supply PPE during the crisis distributed only 50% or less of the modelled requirement for gowns, eye protectors or aprons, the report found.

According to the report, face masks and clinical waste bags were the only items which matched the requirements of health providers during this period.

But the case was even worse for social care settings where central stocks distributed in the same time frame “accounted for 15% or less of the overall modelled requirement for any item of PPE” – with the exception of face masks.

The distribution figures in the report and in these findings do not include PPE that providers already held or bought themselves.

In addition, the NAO recognised that testing for health and social care workers had also faced challenges.

It was announced on 17 March that testing would be rolled out to NHS staff with symptoms but limits on testing capacity meant these were rolled out to symptomatic NHS staff from 27 March, noted the report.

The testing offer was then extended to care workers on 15 April and to the rest of their households two days later.

As of 28 April, all care home staff were able to get a test, but this was capped by the DHSC to 30,000 tests shared between staff and residents of care homes.

At the time of the NAO report, the DHSC did not know how many NHS or care workers had been tested in total during the pandemic.

The report warned that when health and social care staff could not get prompt tests, “this can have several adverse consequences, including potentially unnecessary absence from work, personal anxiety and increased spread of the virus”.

“A vital opportunity to stockpile adequate equipment was missed”

“Even as testing eligibility increased during April, some staff, particularly in the social care sector, reported being offered tests in inaccessible locations and others reported that they continued to be unable to get tests,” it noted.

It also said that provider organisations had reported they were “concerned that there was still no programme in place to enable comprehensive, routine and regular home testing for staff and residents in care homes”.

The report flagged that patients discharged quickly between mid-March and mid-April were sometimes placed in care homes without being tested for coronavirus.

Between 17 March and 15 April, around 25,000 people were discharged from hospitals into care homes, but due to government policy at the time, not all patients were tested for Covid-19 before discharge.

However, the report highlighted that on 15 April policy was changed so that all those being discharged into care homes were tested.

The report goes on to discuss how the government increased workforce capacity by redeploying staff, offering nursing students paid extended clinical placements and encouraging those who left the workforce to return to practice.

“By the end of April, an extra 18,200 NHS staff were deployed in clinical and support roles, including 7,000 nursing and midwifery students and 8,000 returning retired and former staff,” it noted.

However, it was clear that absence rates in health and social care had also risen due to Covid-19.

According to the NAO, the absence rate for NHS acute hospital staff “almost doubled” during the outbreak and peaked on 4 April 2020 with “9% absent reasons related to Covid-19”.

The adult social care action plan, published in April, set out to attract 20,000 people into the sector over three months, however the DHSC “does not know how it is progressing against this aim”, the report said.

The reported absence rates in care homes were on average around 10% across mid-April and mid-May, according to the document.

“While measures have been taken across the NHS and adult social care to protect the well-being of staff, by its nature the Covid-19 emergency has placed great additional stress on health and social care workers,” the NAO added.

In April, a Nursing Times survey revealed almost all nursing staff were feeling more stressed and anxious than usual, with a third describing the state of their mental health as bad during the Covid-19 crisis.

Commenting on the report from the NAO, Unison assistant general secretary Christina McAnea said: “This is a catalogue of errors and highlights once again a complete absence of planning or thought for social care.”

She noted that discharging patients to care homes without a Covid-19 test was “simply scandalous and accelerated the spread of the virus among an obviously high-risk group”.

Ms McAnea added: “This report confirms what staff have said from the start, that the supply of protective equipment in social care was woefully inadequate.

“And it makes clear the government doesn’t know how many people have actually been tested in care.”

The care sector was “out of sight, out of mind in the early stages of the pandemic”, she added.

Meanwhile, Susan Masters, Royal College of Nursing director of nursing, policy and practice, said the report showed “nursing staff were let down by a system ill-prepared to tackle this pandemic”.

“Our members in working communities, care homes or hospitals, who have had trouble accessing the necessary protective equipment to keep them and their patients safe, will be alarmed to see that a vital opportunity to stockpile adequate equipment was missed,” added Ms Masters.

“Years of under-investment means social care was left exposed. As we emerge from this pandemic, it’s important the government learns from these mistakes so nursing staff can provide the best quality care going forwards.”

Andrea Sutcliffe, chief executive and registrar of the Nursing and Midwifery Council, said the report highlighted the “enormous challenges faced by the health and care system in responding to the Covid-19 pandemic”, adding at the “forefront of that response are nurses, midwives and nursing associates”. 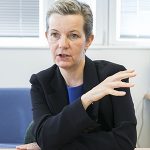 She stressed that the pandemic was “far from over” and said the “threat of a second wave is a very real possibility”.

“It’s vital that the mental and physical wellbeing of staff is prioritised in the weeks and months ahead,” added Ms Sutcliffe.

She went on to note that the NAO document raised “important considerations for government and the entire health and care system”.

“We must all take seriously our responsibility in learning from what has happened so far and in preparing for both the short and longer term challenges that lie ahead,” said Ms Sutcliffe.

Also commenting, Professor Martin Green, chief executive of Care England, said: “This report makes it crystal clear for all to see just how under resourced care homes were before the pandemic hit.

“We should be congratulating adult social care staff for going above and beyond their duties in order to provide care for their residents especially against a backdrop of insufficient funding, lack of PPE and an inadequate testing regime.”

In response to the report, a DHSC spokesperson said the department had “taken the right decisions at the right time based on the latest scientific and medical advice”.

“Our plan throughout has been to save lives, protect our NHS and flatten the curve,” they added.

They said it had been “working tirelessly” with the care sector to “reduce transmission and save lives”.

The spokesperson added: “We have delivered over 1.7 billion pieces of PPE and we continue to ensure supplies reach the frontline.

“The modelled PPE requirements presented in this report are theoretical worst case estimates – it is misleading to compare them to figures on centrally procured PPE which do not account for equipment supplied through other routes or existing local stocks.”

CNO allegedly cut from No.10 briefing after refusing to back Cummings

Breast cancer risk from HRT double what was thought