Up to 3,000 nurses and health workers took part in a series of online and in-person pay protests across the country this weekend, despite several being cancelled because of the rise in coronavirus cases.

Nurses both lined the streets and joined together virtually to continue their fight for a 15% pay rise on Saturday.

On Friday, it looked like only 10 out of a planned 19 events were expected to go ahead. However, organisers confirmed today there were in fact 14, of which some had shifted to online or to smaller scale actions.

The pay protests had been organised by the NHS workers say NO! group, which is led by frontline nurses and midwives, in conjunction with Nurses United.

The two grassroots groups, which have been holding demonstrations throughout the summer, are calling for a 15% pay rise for NHS workers by the end of the year.

Campaigners say they are angry at the government’s decision to exclude their professions from the recent pay award for other public sector professionals in England, including doctors, teachers and police officers.

The next pay negotiations for NHS staff on Agenda for Change contracts in are not due to take place until 2021, when the current three-year deal comes to an end in March.

However, campaigners say pay rises for nurses and other healthcare workers should be brought forward, especially given their tireless efforts during the Covid-19 pandemic.

Making nurses wait until next year to be considered for a new pay rise is “not acceptable”, health sector unions warned back in July, following the announcement of a wage increase for other public sector professions.

Anthony Johnson, a health visitor and lead organiser at Nurses United, said it was unfortunate that so many physical demonstrations had been cancelled, but stressed it was the right thing to do.

He told Nursing Times that virtual events had been held in Liverpool and Wales instead of in-person demonstrations.

Meanwhile, in Nottingham, smaller actions had also taken place where health workers spoke to the public in the streets about the campaign in groups of two.

Ahead of the weekend, planned protests had been cancelled in Leeds, Cardiff, Plymouth, Liverpool and Birmingham, among others.

Mr Johnson said: “This weekend we saw NHS workers continuing their fight for a 15% pay rise to ensure that we have safe staffing within our NHS.

“It was unfortunate that so many events had to be cancelled but we started this campaign to ensure that we would be prepared for a second peak of Covid-19 and it was the responsible thing for organisers to do.”

He added that the groups would “continue to carry out actions and trainings to make sure that more nurses feel confident to take action to defend themselves and their patients during this second peak”.

Those behind the pay movement had also said previously that the rise in coronavirus cases across the country and the emergence of a potential second wave had increased the urgency of their campaign.

One of the leaders of NHS workers say NO!, Holly Turner, told Nursing Times that there had been up to 3,000 in attendance of the pay events on Saturday. 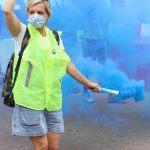 Prior to the cancellations organisers had expected up to 10,000 attendees.

Ms Turner, who is a learning disabilities nurse, said the demonstrations were “once again full of energy and emotion”.

“It is inspiring to see the solidarity between all different NHS workers and something which we can continue to build on,” she told Nursing Times.

The campaign “continues at full strength” and was building throughout health staff’s workplaces as well, she noted.

The groups were also “heartened by the support” from unions Unite and GMB who are also backing the 15% pay rise. Ms Turner said their support had “really given campaigners a boost”.

On Tuesday evening, Ms Turner will chair a meeting of national organisers via Zoom where they will “share ideas for future actions and agree dates to be shared with the wider group”.

Bridget Catterall, a former nurse, had photographed some of the demonstration in London (see below).

She told Nursing Times that “’anger’ and a ‘determination to be heard’ would describe the mood” of the protest.

In response to the pay protests, a Department of Health and Social Care spokesperson said: “We are grateful for the hard work and dedication of our frontline staff, particularly during the pandemic.

“NHS staff are currently benefitting from the final year of a three-year pay deal, agreed with trade unions, which has delivered year-on-year pay increases, such as increasing the starting salary for a newly qualified nurse by 12% by 2021.

“The independent NHS Pay Review Body makes recommendations to government on pay increases for NHS staff, including nurses, and we will consider their advice when we receive it, while continuing to listen to our valued staff and the trade unions to ensure everyone is rewarded fairly.” 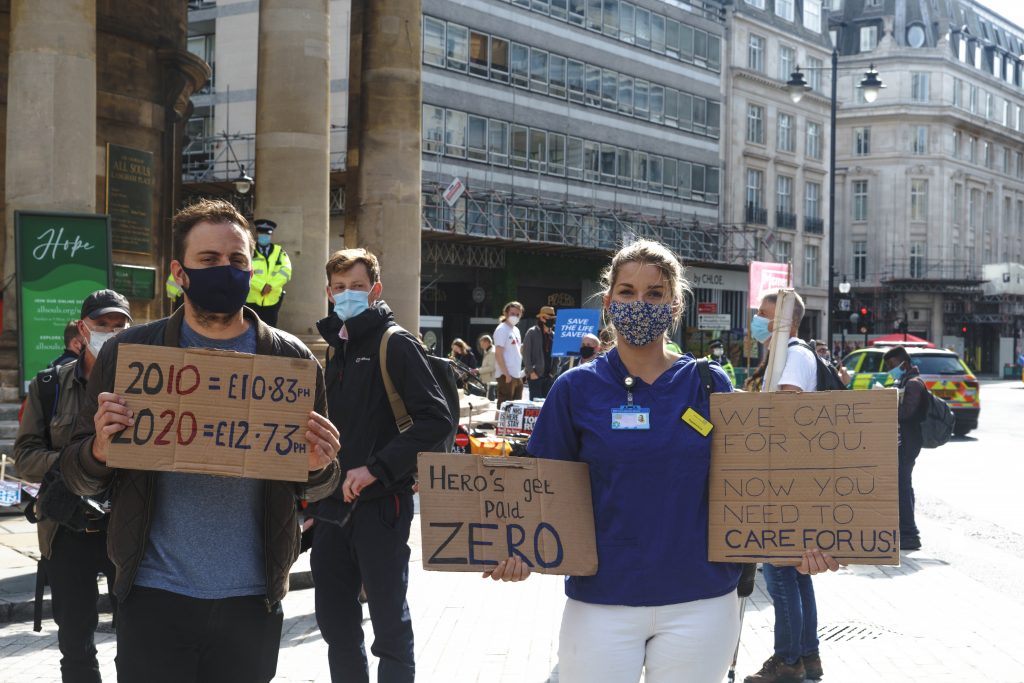 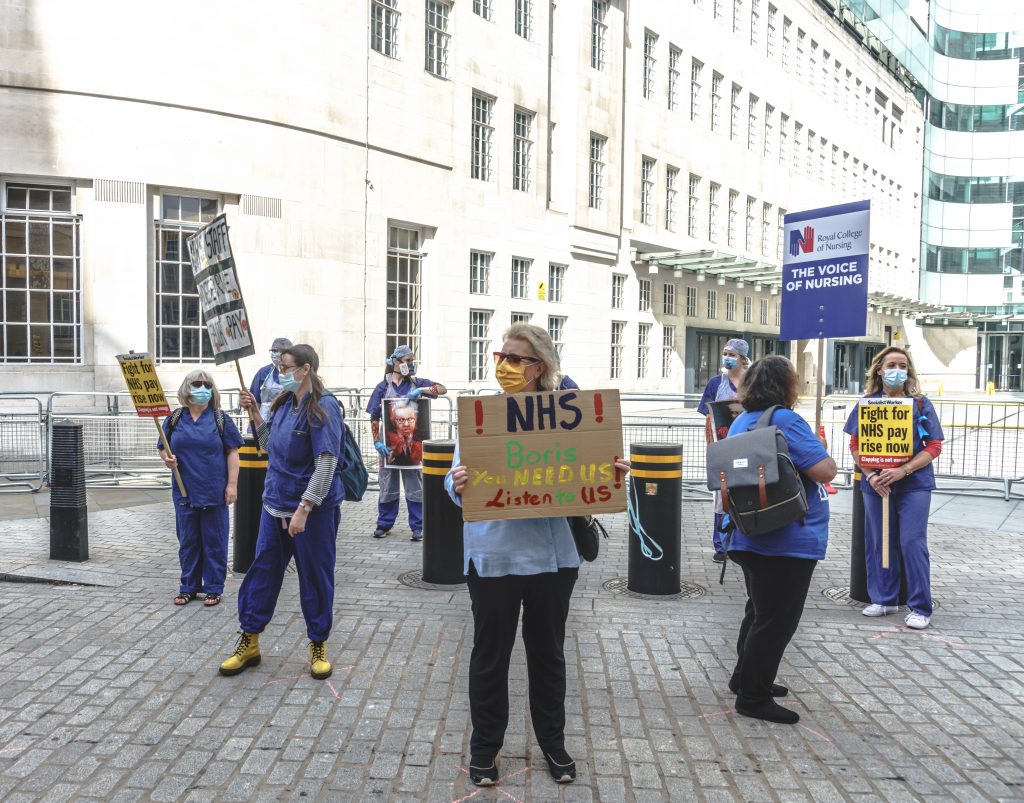 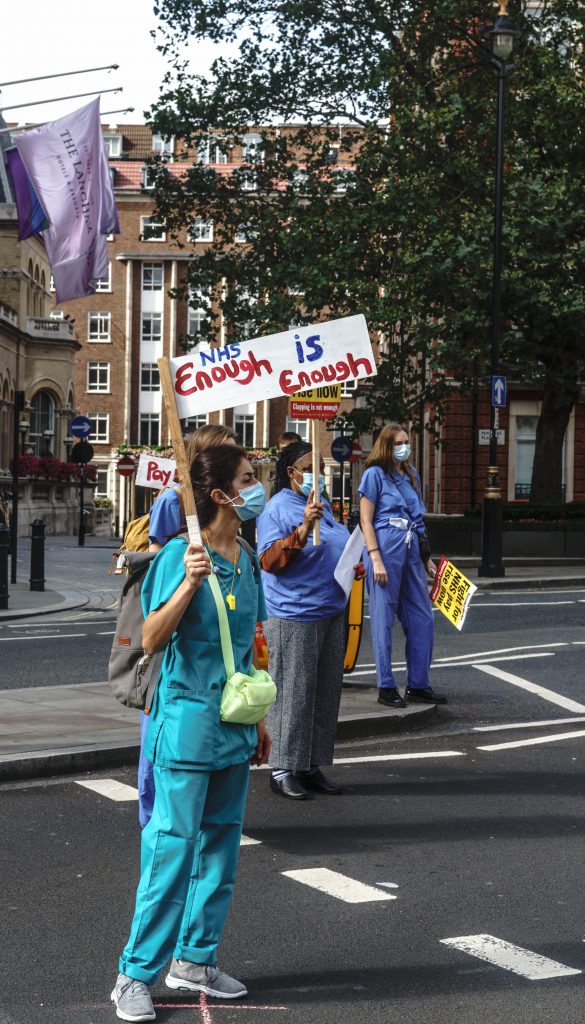 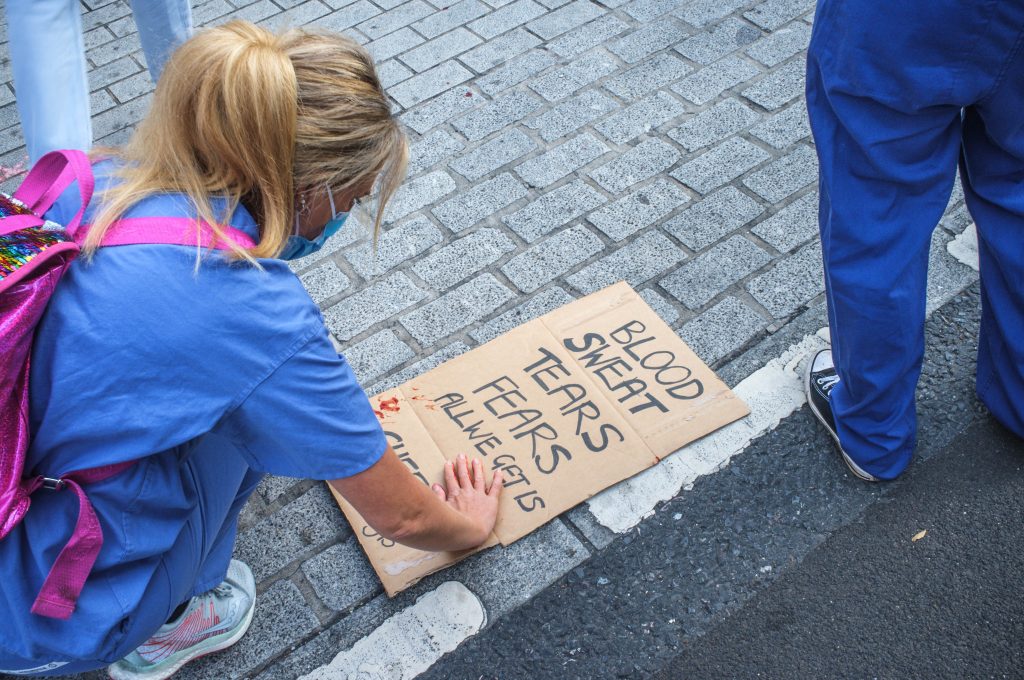 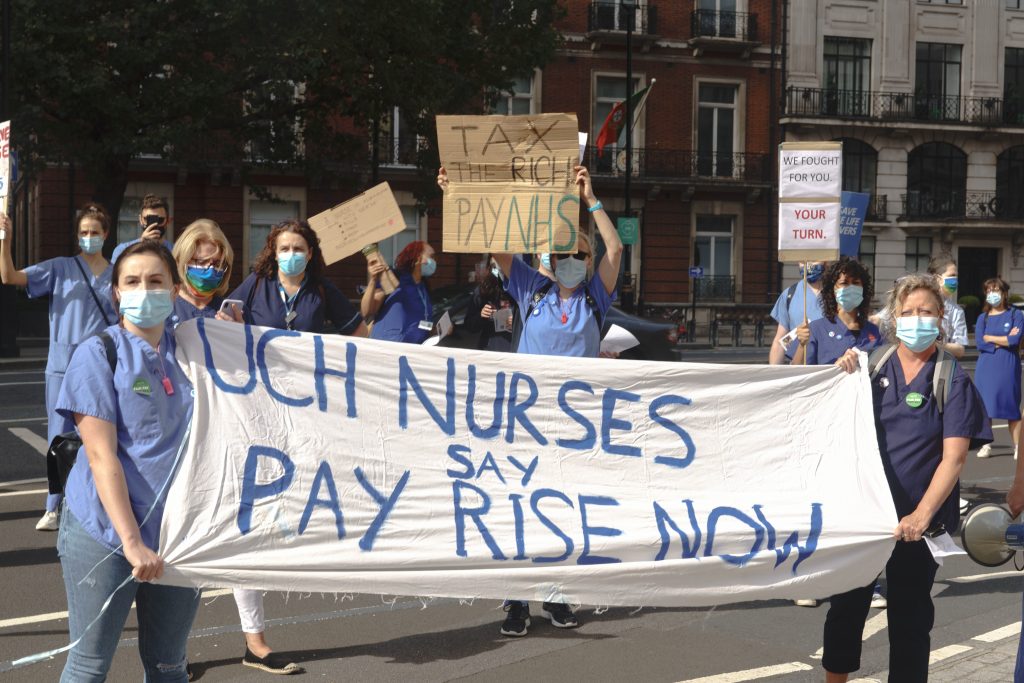 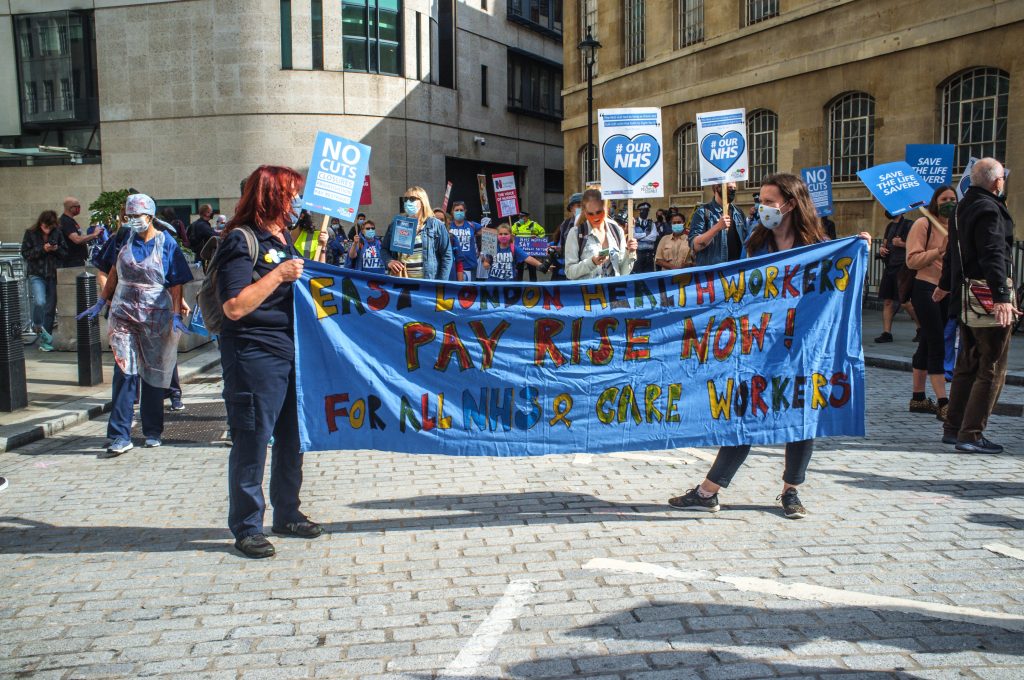 Will Covid-19 affect the delivery of compassionate nursing care?