Striking nurses on the frontline of Northern Ireland’s health service crisis have told how their country’s “broken system” has left them feeling “overworked” and “undervalued”.

More than 10,000 nurses representing the Royal College of Nursing and Unison have walked out today as part of their ongoing fight for fairer pay and safer staffing.

“I feel, on a daily basis, that the NHS patient care is compromised”

Nursing Times visited picket lines at Royal Victoria Hospital (RVH) and Belfast City Hospital to speak to those who are taking a stand.

Louise Cochrane, RCN member and nurse in RVH’s children’s wards, said that without support from parents pitching in to help with care, “there’s no way we would manage”.

“We’re depending more and more on parents to do the care that nurses would have done, and families in general, even on the adult ward,” she added.

“I think it’s about identifying that the whole system is broken and it needs a big cash injection and it needs people to take it seriously.”

Anne Nesbitt, RCN member and also a nurse working at RVH children’s wards, said nurses had proved that “enough is enough” by sacrificing wages to strike.

She said: “[How is it that] we, who are already underpaid, overworked, disrespected, undervalued, be short a day’s wage?

“It’s a crying shame. And that’s why we’re standing here, and it makes me so angry they’ve made us a political football.”

Linda Smith, a nurse from RVH and Unison member, said the dispute was not just about money.

She said: “It’s about equality, and it’s about knowing your own worth. It’s having self-respect and respect for your profession and trying to save this profession.

“I never thought that I would see this day.”

Conor McDowell, charge nurse and RCN member who has protested on all three strike days hosted by the college since December, said nurses had been talking about unsustainable staffing for years.

He said: “I feel, on a daily basis, that the NHS patient care is compromised and there are fundamental issues that we’ve been raising for many years.

“I’m hopeful that we’ll get what we’ve asked for, and that is pay parity with our colleagues across the UK but also safe staffing legislation – which is more important to any nurse standing on the picket line today.

“People are being nursed in corridors and we now talk about corridor medicine and how we maintain and respect dignity of those patients, which is absolutely ludicrous.

“When I qualified nine years ago, I never thought I would nurse a patient on a corridor but unfortunately it’s come to that.”

Some protesters moved their picket to outside the Department of Health this morning while politicians reconvened in Stormont in fresh talks to reestablish the assembly, which dissolved three years ago.

The ongoing dispute centres around equal pay for Northern Irish health workers with their counterparts in other UK countries and for more measures to improve staffing levels which have been branded as “unsafe” by union leaders.

On average, a nurse in Northern Ireland earns £2,000 less than a nurse in England – with an even wider gap compared to a nurse in Scotland.

The RCN estimate there to be 2,800 vacancies that put patient care at risk.

“We know, we are well aware, that for three years our assembly has not sat. Our politicians are getting paid while technically, they’ve been on strike. These staff are out here on strike, losing their pay.

“They feel so strongly about the need for patient care and safe care that they are willing to do that.”

Pat Cullen, director of the RCN in Northern Ireland, said the decision to strike again today was made “with great dismay”.

“Nurses have shown courage and resilience during this dispute and will continue to do so until we can achieve a system that is fit for purpose,” she added. 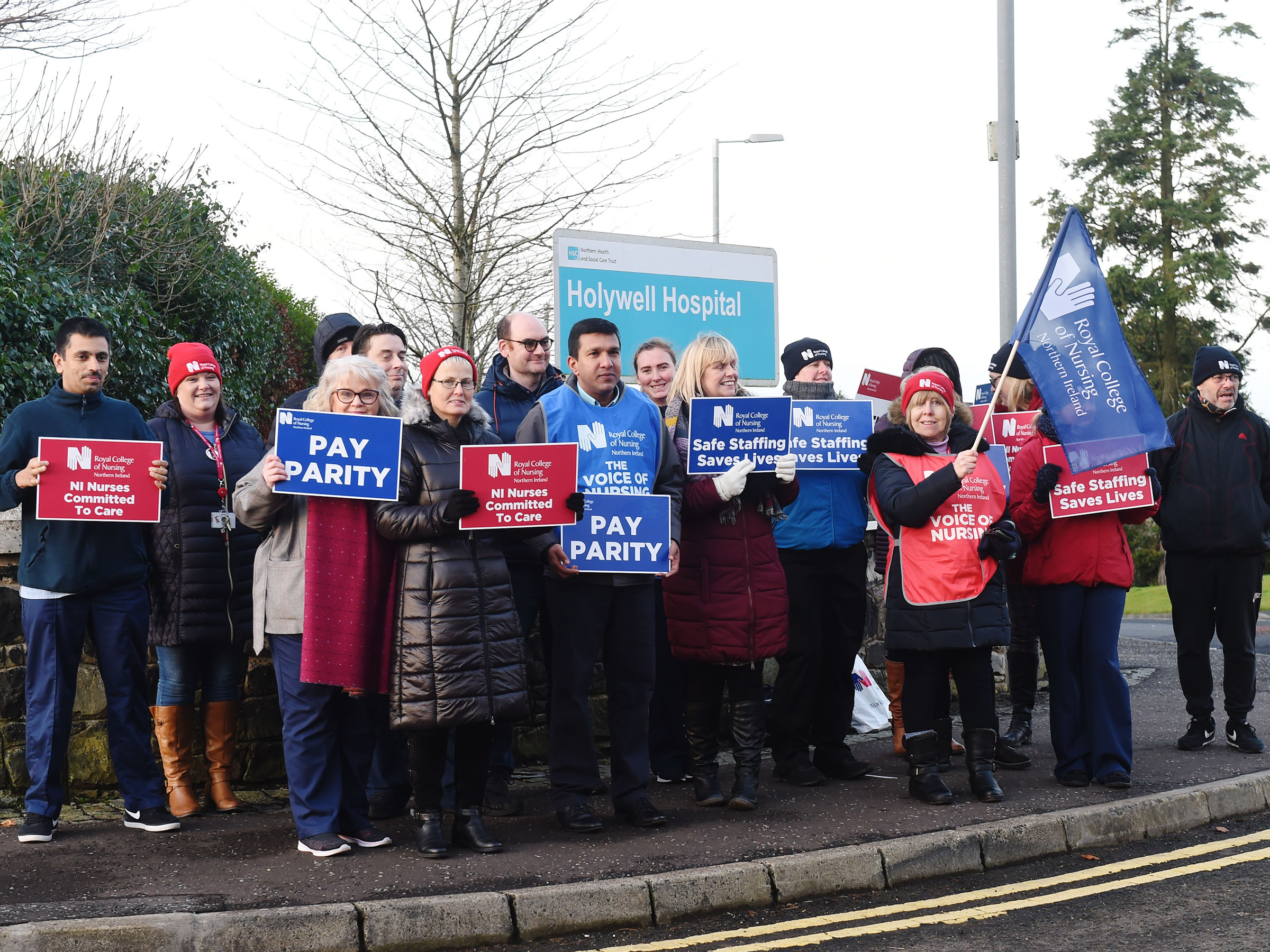 Nurse seeks to raise consent age for transgender medication to 18