The UK will now be able to recruit health and social care staff from more than 100 additional countries than before, after the government updated its code of practice for international recruitment.

However, unions have responded by warning the government against “unfair” overseas recruitment, as part of its efforts to try and meet its policy targets on increasing nurse numbers.

The government has now aligned itself with the World Health Organization’s (WHO) advice on ethical international recruitment, stating that overseas recruits would be treated fairly and provided with appropriate support.

“We expect the recruitment of internationally-trained nursing staff into the UK to be transparent, clear and fair”

But the move will also widen the global market from which the UK can ethically recruit, as the WHO has far fewer countries on its safeguarded list.

It will see the UK adopt the WHO’s ‘red’ list of 47 countries where active recruitment cannot be undertaken. This will replace the previous UK-held list of 152 countries.

By widening its international recruitment options, the government said the updated code would help to meet its target of delivering 50,000 more nurses by 2024.

But nurse leaders warned the government against using “unfair recruitment practices” to meet a “political goal”, and stressed that the recruitment of overseas nurses must be “transparent, clear and fair”.

International recruitment has been a focus of the NHS Long Term Plan due to ongoing workforce shortages, but concerns have been raised in recent years around recruiting nurses from other countries that are also struggling.

The government’s updated code of practice, published on Thursday, sets out principles and best practice benchmarks that should be adhered to by employers and recruitment agencies when recruiting overseas.

The objective is to ensure that international health and social care worker recruitment is “undertaken in an ethical, managed and mutually beneficial way and in line with advice from the WHO”, said the code.

It will also strive to prevent active recruitment to the UK from countries on the red list, unless there is a government-to-government agreement.

In addition, the code states that the aim was to “promote high standards of practice” in recruiting overseas staff and ensure that any recruitment is “conducted in accordance with internationally agreed principles of transparency and fairness”.

The UK would also aim to safeguard and support countries with the “most pressing health workforce challenges”, it said.

They would also have the same access to further education, training and continuous professional development, it said.

In response, Royal College of Nursing chief executive and general secretary, Dame Donna Kinnair, said: “We expect the recruitment of internationally-trained nursing staff into the UK to be transparent, clear and fair.

“This is vital during the global Covid-19 pandemic and in the long term,” she said.

She stressed that the government must not “resort to unfair recruitment practices” to meet a “political goal”.

“This would damage the UK’s reputation abroad, and more importantly, the health and care systems of developing countries already hit hard by Covid-19,” said Dame Donna.

In addition, she warned that, while nursing staff who trained internationally played an “integral role” in the workforce, “overseas recruitment must complement the domestic workforce and not be a substitute for adequate training, education and investment”.

Meanwhile, registered nurse and lead organiser at Nurses United, Anthony Johnson, said: “As the grandson of an international nurse who helped to build our NHS it is plain to see that we still need to rely on our colleagues from other countries.

“It is good to see the UK updating its code of practice, but we need to ensure that we treat those nurses fairly,” he said.

“There’s much more to being ethical than updating a code, it’s how you treat people on the ground”

He cited challenges faced by international nurses, especially during the pandemic. These included many feeling that their “visas were under threat if they didn’t work on hot wards during Covid-19”.

“Others said that they experience racism both individually and institutionally,” added Mr Johnson. “These are things that will drive our colleagues out of the jobs they love and put more pressure on our NHS. 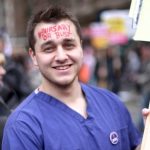 “There’s much more to being ethical than updating a code, it’s how you treat people on the ground.”

In announcing the update, care minister Helen Whately said: “I am hugely grateful for all of the frontline health and social care workers from overseas who have worked tirelessly to save lives and provide the best possible care during this pandemic.

“We will work with countries all over the world to promote the best standards of ethical recruitment of health and social care staff and I look forward to welcoming more incredible talent to the UK.”

She added: “Alongside our ambition to increase the number of UK-based nurses, this will allow us to continue to deliver world-class care to patients for years to come,” added Ms Whately.

Each of the four UK nations will adhere to the overall aims, objectives and guiding principles of the code of practice, but each holds its own specific code to “reflect the different organisational structures in each nation”.

Nurse 'proud to be first in world' to insert prostate implant