The promised exemption to the immigration health surcharge for overseas health and care staff will come into force immediately and be backdated to 31 March, the government has finally confirmed.

Ministers today offered further details about the scheme after coming under pressure from unions, opposition politicians and other organisations to provide clarity on the situation.

It came after prime minister Boris Johnson’s pledge made in May this year to scrap the fee for health and social care professionals – just one day after refusing to budge on the policy.

Since then, the government has faced requests for more information about how the exemption would work and a timescale for implementation, including from the Royal College of Nursing.

The home secretary and health and social care secretary today confirmed that health and care staff would “now be permanently exempt from this charge”, and that refunds would be offered to those who had paid the fee as part of their Tier 2 visa since 31 March 2020.

They said, going forward, the exemption would be applied automatically as part of the new “health and care visa”, which is being introduced in 2021 under the new post-Brexit immigration system.

Those eligible for the visas will also benefit from reduced visa application fees and will be able to expect a decision on whether they can work in the UK within a “fast-tracked” time of three weeks.

However, while registered nurses across both health and social care sectors will qualify for the visa, care workers will not, as previously reported by Nursing Times.

Health and social care professionals who are not eligible for the visa will instead have to pay the immigration health surcharge upfront and claim a reimbursement – but may have to wait up to six months for the money.

But the new immigration rules are likely to make it difficult for care workers to gain entry to the UK at all from January next year.

Instead, the government said it wanted employers to “focus on investing in our domestic workforce” and was working on introducing “a proper career structure” to make roles in the care sector more attractive to people from the UK.

He said: “The latest update from the government on the refund and exemption from the health immigration surcharge, which we have been calling for on behalf of members, is welcome news for the NHS, but still leaves a potential staffing blackhole for social care.

“We continue to believe there is an urgent need to recruit internationally into care worker posts – otherwise, the system could collapse.

“Of course, international recruitment won’t solve the problem on its own, but it is impossible to grow the domestic workforce overnight.”

He called on ministers to outline “stopgap plans” to support the sector in the interim between the new rules being introduced on 1 January, and sustainable measures to meet the needs of the social care workforce being established.

Meanwhile, Dame Donna Kinnair, RCN chief executive and general secretary, said: “We have waited for weeks for this update from the government, and are disappointed with the news that many staff – particularly those working in social care – will still have to pay this grossly unfair financial charge upfront in order to work in the UK.”

The RCN leader claimed the proposed system of reimbursement for those who did not qualify for the visa “does not go far enough”.

“The government is running out of time to resolve the issues facing the social care sector,” added Dame Donna.

“If they continue to ignore the warning signs, health and care services across the UK will be put at risk, as will the care of patients and those supported by social care.” 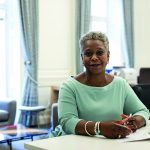 Legislation to implement the new health and care visa route was due to be laid out in parliament today, and should open for applications from August.

The Department of Health and Social Care said it was working with the sector to set up a system for reimbursing health and social care professionals outside of the scope of the visa, to launch on 1 October. Reimbursements would be issued every six months, it added.

In the meantime, the department said it would publishing details on the gov.uk website for people to request a refund.

Health and social care secretary Matt Hancock said: “Our health and care system has always had a proud tradition of welcoming overseas staff to work, train and live in the UK, and I’m proud that the NHS is a destination of choice for talented people from around the world.

“The unwavering commitment, skill and compassion staff have shown during the fight against this deadly virus is nothing short of phenomenal, and the reimbursement of the immigration health surcharge recognises the enormous contribution of those who have come to the UK to work in health and social care.”