Capillary refill time is a simple bedside measurement that is undertaken a part of the ABCDE approach to assessing acutely ill patients. This article outlines the rationale for measurement and provides a step-by-step guide to the procedure

Capillary refill time (CRT) is a measure of the time it takes for a distal capillary bed, such as those found in the fingers, to regain colour after pressure has been applied to cause blanching. A prolonged CRT may indicate the presence of circulatory shock.

Tissue perfusion is dependent on an adequate blood pressure in the aorta which, in turn, is determined by the product of two factors:

Cardiac output is determined by the heart rate and stroke volume.

CRT is part of the circulation (C) component of the ABCDE approach, which is used to assess and treat patients who are acutely ill. However, its reliability has been questioned as there is very little research data to confirm validity (Shinozaki et al, 2019; Lewin and Maconochie, 2008).

The normal CRT is <2 seconds; a CRT of >2 seconds suggests poor peripheral perfusion and may be an early sign of shock (Hernández et al, 2020). However, several other factors can cause a prolonged CRT, including:

Accurate timing of CRT is difficult: Fleming et al (2016) advised using a watch or clock to help measure CRT, but this can be difficult in practice as CRT is measured over a very short period of time. Some nurses count in thousands with each number (1,000, 2,000, 3,000) equating to a second but this approach may not be performed consistently between staff.

It is important to interpret CRT in the context of a comprehensive assessment of circulation, which should include:

Shock classifications are outlined in Box 1, with clinical features given in Box 2.

It is important to remember that hypotension is not a prerequisite for diagnosing shock because compensatory mechanisms such as vasoconstriction – which diverts blood from the peripheral circulation to the vital organs – can preserve blood pressure in the short term (Van Genderen et al, 2013). As a consequence, patients in shock may exhibit adverse changes in CRT before a fall in blood pressure is detected.

CRT is a marker of peripheral perfusion and an abnormal CRT in patients with septic shock who have received resuscitation in an intensive care unit has been directly associated with poor outcomes (Lara et al, 2017). CRT can, therefore, be considered a simple monitoring tool that can help inform the triage, treatment and follow-up of patients with sepsis-related acute circulatory dysfunction (Hariri et al, 2019).

This procedure is usually undertaken alongside other systemic observations.

An alternative site for measuring the CRT is the sternum (Fig 3). This site is frequently used in emergency departments, especially in winter when patients may come from a cold environment, which affects the accuracy of CRT. 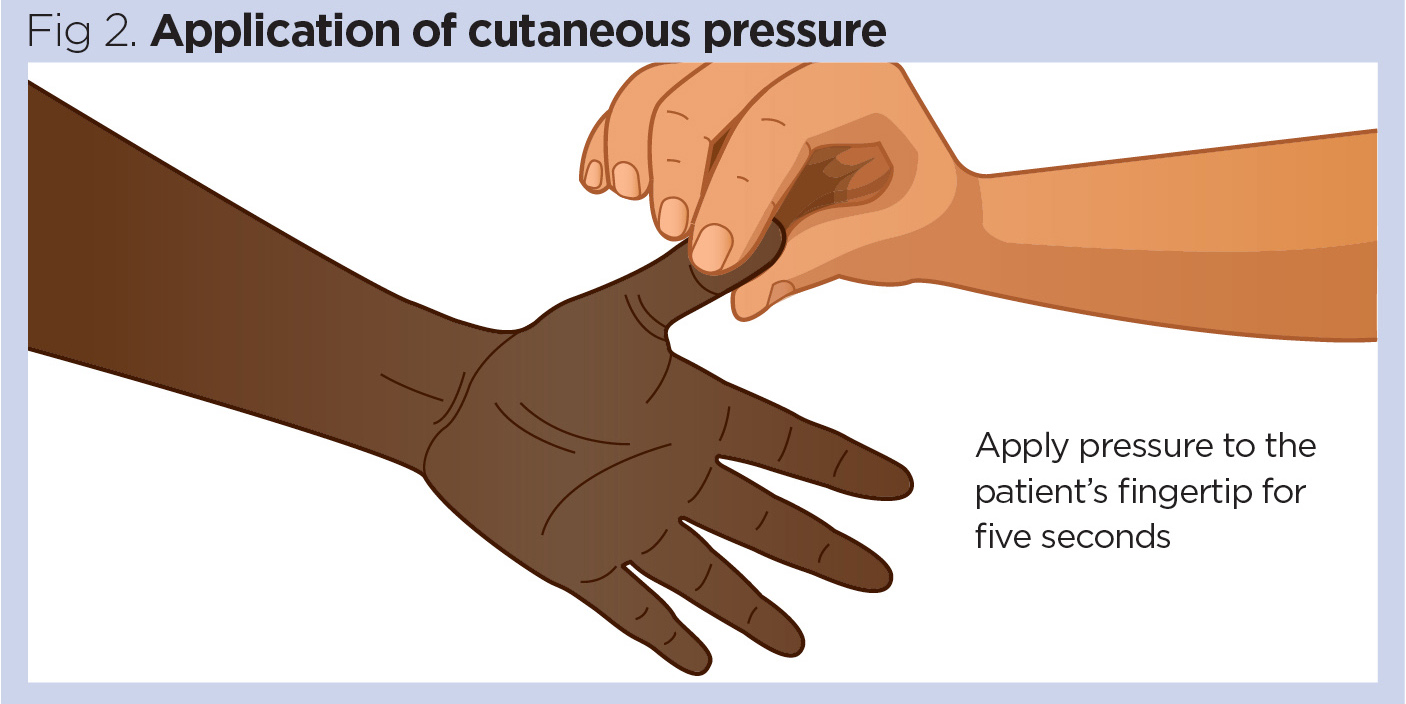 This procedure should be undertaken only after approved training, supervised practice and competency assessment, and carried out in accordance with local policies and protocols.

Lara B et al (2017) Capillary refill time during fluid resuscitation in patients with sepsis-related hyperlactatemia at the emergency department is related to mortality. PLoS One; 12: 11, e0188548.

How a pandemic affects the mental health of the nursing workforce

Covid-19 has 'exacerbated' challenges faced by young people with epilepsy

Covid-19 has 'exacerbated' challenges faced by young people with epilepsy

‘Shocking’ impact of violence and drug use on prison staff | News

Are You the “Twofer”?