Almost half of intensive care staff in England reported symptoms of post-traumatic stress disorder, severe depression or anxiety during the first wave of the coronavirus pandemic, a new study has shown.

Researchers found that poor mental health was also more pronounced among nurses than doctors or other health staff.

The findings come within a new study, published today by King’s College London, which showed the stark impact of working in critical care in June and July last year, and called for a “national strategy” to help protect staff wellbeing.

It was based on a survey of 709 health staff, including 344 nurses, from nine intensive care units across England.

Overall, 45% of respondents reported symptoms of at least one of the following conditions: probable PTSD, severe depression, severe anxiety and problem drinking.

Analysis uncovered that more than one in seven critical care staff reported thoughts that they would be better off dead, or of hurting themselves in some way, for several days.

In addition, nurses were more likely to report poor mental health and ideas of self-harm or suicidal ideation, compared to doctors or other health staff, said the study, which was published in Occupational Medicine.

Lead author Professor Neil Greenberg, from the institute of psychiatry, psychology and neuroscience at King’s College London, said the findings suggested there was an “urgent need for a national strategy to protect staff mental health”.

“Our results show a substantial burden of mental health symptoms being reported by ICU staff towards the end of the first wave in July 2020,” he said.

Professor Greenberg warned that the “severity of symptoms” seen in the study were “highly likely to impair some ICU staff’s ability to provide high quality care, as well as negatively impacting on their quality of life”.

He added: “Whilst these results are in some ways not surprising, they should serve as a stark reminder to NHS managers of the pressing need to protect the mental health of ICU workers now in order to ensure they can deliver vital care to those in need.

“Evidence-based mechanisms should be in place so all healthcare workers, including ICU staff, can promptly access treatment for mental health issues.

“If we protect the mental health of healthcare workers during the Covid-19 pandemic, staff will be better able to sustainably deliver high quality care to the large numbers of patients seriously unwell with Covid-19.”

Nursing Times launched the Covid-19: Are You OK? campaign in April to first raise awareness of the mental health pressures and wellbeing needs of nurses during and after the coronavirus pandemic.

The second phase of the campaign has now been launched, which partly involves calling on relevant organisations, including charities, unions and other representative bodies, to support its aims.

Professor Greenberg added: ‘Our results highlight the potential profound impact that Covid-19 has had on the mental health of frontline UK staff and indicate an urgent need for a national strategy to protect staff mental health and decrease the risk of functional impairment of ICU staff while they carry out their essential work during Covid-19 and beyond.”

Also commenting on the findings, Nicki Credland, senior lecturer at the University of Hull and chair of the British Association of Critical Care Nurses, told Nursing Times that critical care nurses were “bearing the brunt of the storm that is Covid-19”.

“They are under immense physical and psychological pressure, working long hours, supporting families who cannot visit their loved ones in ICU, working in an extremely stressful and complex environment and managing up to four times the workload that they did pre-covid,” she said.

She added: “They are at breaking point and their mental health should be a priority for health leaders and policy makers. Without critical care nurses there is no critical care.”

Meanwhile, the International Council of Nurses has also today warned of a “global phenomenon of mass trauma” among nurses working as part of the Covid-19 response.

Preliminary findings from a recent survey of its more than 130 national nursing associations showed almost 80% had received reports of mental health distress from nurses during the pandemic.

An ICN report, published today, said that nurses from across the globe were “feeling isolated from their families and are anxious about avoiding infecting their family members with Covid-19”.

Nurses had also reported “increased working hours” and that they were “experiencing mental distress due to the lack of personal protective equipment”.

According to ICN data, the proportion of nurses reporting mental health distress since the first wave of the pandemic had risen from 60% to 80% in many countries.

Overall, the report said: “The emerging evidence suggests that there is a global phenomenon of mass trauma experienced by nurses working in the Covid-19 response.”

In wake of these findings, the ICN is warning of what it has coined the ‘Covid-19 Effect’ and has called on the world’s governments to take action.

ICN chief executive Howard Catton said: “We are witnessing a unique and complex occupational trauma that is affecting the global nursing workforce.

“Nurses are dealing with relentless, unprecedented demands from their patients, resulting in physical exhaustion.

He warned that the mass trauma was having an “immediate and profound effect” on the workforce and that it was “highly likely to have a significant long-term impact” too, through PTSD, depression and anxiety. 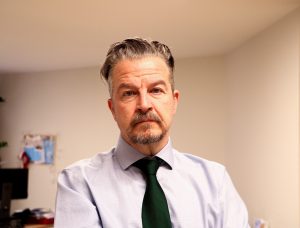 Concerned about the impact of the pandemic on nurse retention, Mr Catton added: “There can be no doubt there will be a large Covid-19 Effect on the size of the nursing workforce, which is already heading for a 10 million deficit.

Mr Catton said the risk that this shortfall posed to health and care services after the pandemic was to “such an extent that I would argue the health of the nursing workforce could be the greatest determinant of the health of the world’s population over the next decade”.

‘Exercising gratitude can help us to feel at peace and empowered’

‘Exercising gratitude can help us to feel at peace and empowered’

‘How we are maximising the Covid-19 vaccination offer’