Nurses fighting for a pay rise have confirmed that nearly half the physical demonstrations organised for this weekend have been forced to be postponed following the rise in coronavirus cases across the country.

On Saturday 12 September, 19 demonstrations were set to take place throughout the UK. However, due to local lockdowns and a rise in Covid-19, organisers have told Nursing Times there will currently now be 10.

As a result, efforts were now underway on Friday to arrange an online demonstration for those in areas that have had to postpone and also for individuals who may be working or self-isolating.

Those behind the campaign stressed that the emergence of increased coronavirus cases placed extra urgency on the need for a pay rise for NHS staff on the frontline.

The pay protests had been organised by the NHS workers say NO! group, which is led by frontline nurses and midwives, in conjunction with Nurses United.

The two grassroots groups, which have been holding demonstrations throughout the summer, are calling for a 15% pay rise for NHS workers by the end of the year.

Campaigners say they are angry at the government’s decision to exclude their professions from the recent pay award for other public sector professionals in England, including doctors, teachers and police officers.

The next pay negotiations for NHS staff on Agenda for Change contracts in are not due to take place until 2021, when the current three-year deal comes to an end in March.

However, campaigners say pay rises for nurses and other healthcare workers should be brought forward, especially given their tireless efforts during the Covid-19 pandemic.

Making nurses wait until next year to be considered for a new pay rise is “not acceptable”, health sector unions warned back in July, following the announcement of a wage increase for other public sector professions.

Ahead of the next round of demonstrations tomorrow, one of the leaders of NHS workers say NO!, Holly Turner, told Nursing Times she was disappointed that some protests had been postponed, but added it was the right thing to do for safety reasons.

She said that the rise in coronavirus cases across the country and the emergence of a potential second wave had increased the urgency of their campaign.

“The reason we pulled through the first wave of it was down to the NHS workers,” Ms Turner told Nursing Times.

“It was down to how hard people worked. We are fortunate that the NHS didn’t buckle under the pressure of the first wave.”

She added: “We know everyone involved in this campaign has worked with chronic under-staffing for years, decades [and] so, as we approach a second wave we really need to see the government investing in the staff with more than claps and gestures.”

Ahead of tomorrow’s planned day of national demonstrations, events have so far been cancelled in Leeds, Cardiff, Plymouth, Birmingham and Liverpool, among others.

Ms Turner, who is a learning disabilities nurse, said the situation was being monitored closely and that more demos would be cancelled if necessary.

For those still scheduled to go ahead, such as in London, Ms Turner stressed to those planning on attending that safety was “paramount” and that social distancing, masks and hand sanitizers were essential.

Pay protests that will go ahead are due to start at 11am and will also include a minute silence at 12am to remember colleagues who have died during the pandemic so far.

Ms Turner wanted to emphasise how hard all the national organisers for the events had been working.

“I am so disappointed for all of them that have had to cancel their events because I know how hard they are working,” she said.

“On top of full-time working in clinical roles, in high-risk situations, dealing with chronic understaffing, they are also trying to motivate staff, organise, chat to the public and organise these events to bring the public and other workers’ attention to the movement and what we are trying to do.

“So, it is really disappointing that they have had to cancel but it says a lot about the health professionals taking their responsibility seriously in that if it is not safe, we will just take a step back.”

She added that the postponements did not “mean by any means that the campaign is over”. “We’re going to be continuing at full strength. We might just need to get a little bit more creative,” said Ms Turner.

Prior to the cancellations, Anthony Johnson, health visitor and lead organiser at Nurses United, said they had estimated a turn out of around 10,000 people. 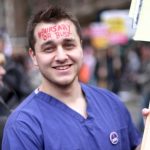 Mr Johnson was due to attend a protest in Leeds, which has now been postponed.

He said the group was encouraging protesters across the country to hold “static” or online alternatives.

Going forwards, demonstrations would also be “much smaller because it makes it easier for us to organisation them, but also maintain social distancing, especially because we think people might be getting a bit busy if we’re going to get a second peak”, he told Nursing Times.

Work continued to be done to encourage nurses and colleagues to get involved with the campaign and share their message and calls for a pay rise in their place of work.

“We have got loads of people involved, but [we’re] trying to get those people to do stuff within their local ward… to just make sure the message is getting out there that this is the pay ask that loads of grassroots nurses are calling for,” said Mr Johnson.

He said the message to staff was “to get involved”, because “that’s going to be the thing that actually gets you the pay rise”.

“We’re trying to get people to do stuff within their local ward, to just make sure the message is getting out there”

On 26 August, a range of workplace pay demos had been held to build the campaign at work, as reported previously.

The whole movement was about securing a pay rise to ensure public safety, added Mr Johnson. But it was also to help “defeat Covid-19” and “improve safe staffing”.

Those that had been involved in the campaign should be “proud of themselves and see what power they have, because that’s why we need to keep going”, he said.

The pay protesters also now had the backing of trade union Unite who have announced they are calling for a “well-deserved” 15% pay rise for NHS staff.

Unite is writing to the government to lodge its pay claim for the NHS workforce after the union’s national health committed voted for an early and significant pay rise of 15% or £3,000 to be brought forward to an earlier date before the current pay deal came to an end.

Unite national officer for health Colenzo Jarrett-Thorpe said: “Hundreds of health and social care staff have lost their lives in the continuing battle against Covid-19 which has heightened the deep appreciation that the public has for the NHS and those who work in it. 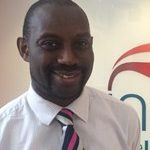 “This public esteem for NHS workers should be reflected by the government which needs to respond by opening pay discussions, following our claim and those of our sister unions, with no further procrastination or stalling tactics.”

He added: “What is needed is an early, well deserved and generous pay rise to repair the damage of the last ‘lost’ decade when pay in real terms was eroded by an estimated 20% for many long-serving staff.

“Many, including prime minister Boris Johnson, owe their lives to the NHS – and now is the time to acknowledge that 24/7 commitment with a decent pay rise that reflects the sentiments of a grateful and relieved country.”

The Royal College of Nursing had also recently launched its Fair Pay for Nursing campaign, which is calling for a new one-year pay deal, to be implemented as soon as possible.

A Department of health and Social Care spokesperson said: “We are grateful for the hard work and dedication of our frontline staff, particularly during the pandemic.

“NHS staff are currently benefitting from the final year of a three-year pay deal, agreed with trade unions, which has delivered year-on-year pay increases, such as increasing the starting salary for a newly qualified nurse by 12% by 2021.

“The independent NHS Pay Review Body makes recommendations to government on pay increases for NHS staff, including nurses, and we will consider their advice when we receive it, while continuing to listen to our valued staff and the trade unions to ensure everyone is rewarded fairly.”

Guidance on managing pneumonia in the community