The minister for care has come under fire from the nursing community and beyond for claiming that student nurses were “not deemed to be providing a service”.

Helen Whately confirmed the government had “no plans” to backdate a new financial support package that is set to be introduced for students starting this autumn.

“They need to reassess, and they need to have a look at the debt we have accrued and do something about it”

Her comments came in a letter posted to third-year paediatric nursing student Jess Collins who argued that those who had studied from 2017 to 2020 had unfairly missed out on financial aid.

A bursary, which covered the cost of training to be a nurse in England, was scrapped in 2016. As reported previously by Nursing Times, applications to study nursing in England crashed in the wake of this and have only started to rise again slowly since 2018.

However, following pressure from nursing and student representatives, the government announced in December 2019 that all student nurses on English degree courses as of September 2020 will receive a £5,000 annual grant to help with their living costs.

Additional payments of up to £3,000 will also be available for students in regions or specialisms struggling to recruit or to help students cover childcare costs.

However, Ms Collins, who studies at De Montfort University Leicester, had highlighted that students who started nursing degrees in 2017 had missed out on any kind of financial support.

The third-year student started a petition calling on the government to “write off student nurses’ debt and abolish future tuition fees” and contacted her local MP, Tom Pursglove, for help.

In a letter in response, which has been shared and criticised widely on social media, Ms Whatley said: “The government has no plans to introduce a scheme that will backdate the offer to students who completed the courses in earlier years.

“Student nurses in training are supernumerary and are not deemed to be providing a service.

“They are required to undertake 2,300 hours of clinical practice to learn skills necessary for entry to the workforce. Whilst they may be performing limited clinical duties, this is under close supervision and they are not being paid to staff hospitals.”

While in ordinary times, the Nursing and Midwifery Council requires student nurses to be supernumerary on placement, meaning they cannot be counted in safe staffing numbers, those on paid placements during the pandemic were not required to be supernumerary.

In an interview with Nursing Times, Ms Collins said students in the 2017 cohort – many of whom, including herself, had answered the government’s call for support on the coronavirus front line – had felt unappreciated “from day one” of their programmes.

Explaining how her peers had reacted to the letter from Ms Whatley, she said: “There were a lot of tears, there wasn’t just anger, there was a lot of upset for people that just felt it was really insulting.”

“We are learning, but we are very much working. Second and third year especially. We’re taking our own patients, that’s what is expected of us,” she told Nursing Times.

The care minister’s letter goes on to wrongly state that the government had created “a temporary nursing register, allowing students in their second and third year of study to opt to work for the NHS” during the pandemic.

Ms Collins said she was “shocked” not only by Ms Whatley’s comments about student nurses not providing a service to the NHS, but also “her clear lack of knowledge on our place right now and what we are doing and what our role was”.

She described the minister’s comments as “hugely insulting” to students and called for an apology.

“From the start we were at a disadvantage being the first cohort that came in with no help, I’m leaving university with £60,000 plus worth of student debt and we still stepped up when they asked us to,” she said.

Ms Collins added: “I just feel that we have given so much.

“We just keep on giving and the fact of the matter is we’re always going to do that because at the end of the day we have chosen this profession, we’re passionate about it, but I don’t think that gives the government the right to take advantage of that knowing that we’re going to do this no matter how they treat us.

“They need to reassess, and they need to have a look at the debt we have accrued and do something about it.”

In response to criticism received about the letter, Ms Whately said: “The whole country is grateful to student nurses for their heroic work on the NHS frontline during this unprecedented global pandemic.

“Supernumerary status for student nurses is a technical definition created to ensure they have the space and time to learn, and it is widely supported across the nursing profession.”

She reiterated that there was a “strong financial aid package for nurses and going forwards we have introduced even further support for nursing, midwifery and many allied health profession students consisting of a £5,000 to £8,000 grant to help with maintenance and associated study costs, which does not need to be paid back”. 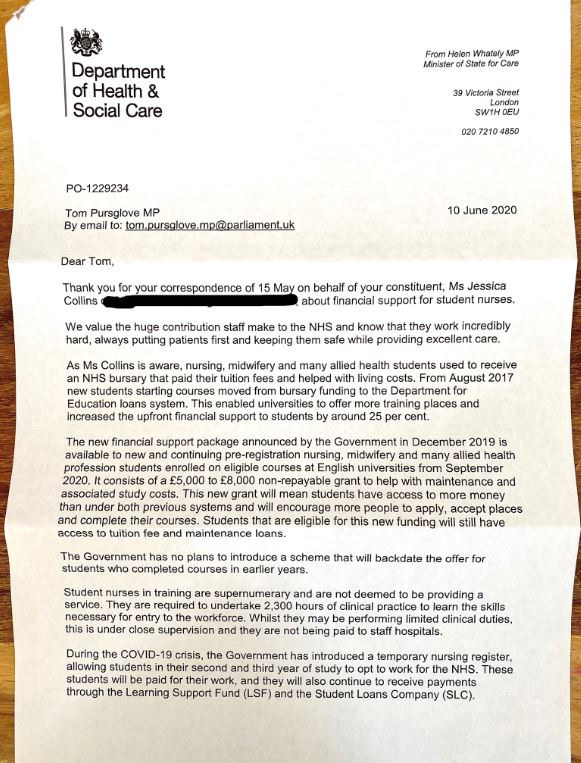 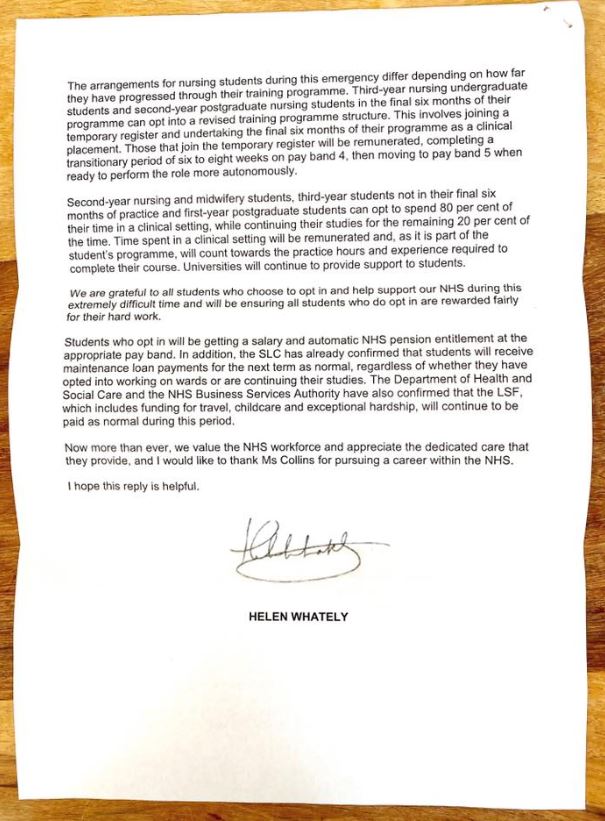 Ongoing concerns over fairness and transparency of NMC cases | News