A programme to cut inappropriate use of non-sterile medical gloves

Healthcare workers should only use non-sterile gloves for self-protection when exposure to blood or body fluids is likely. Overuse of gloves – can have negative repercussions, including higher expenditure and waste, more skin problems and missed opportunities to decontaminate hands. At Great Ormond Street Hospital, infection control audits had shown that clinical staff were not always using non-sterile gloves appropriately or complying with hand-hygiene requirements. In April 2018, an educational awareness programme was launched to help staff risk assess the use of gloves for self-protection. Created by practice educators and infection prevention and control nurses, with input from all those affected by the changes, the programme has had good initial outcomes.

Gloves worn for self-protection are part of the personal protective equipment used for standard infection-control precautions (SICPs) and transmission-based precautions (RCN, 2018). Before an intervention, staff must conduct a risk assessment to determine the likelihood of their exposure to blood, body fluids or mucous membranes; they should only wear gloves if exposure is likely or highly likely (Loveday et al, 2014b).

Evidence suggests that, when healthcare staff use gloves to protect themselves, they often use them for multiple care interventions (Wilson and Loveday, 2014). For example they may wear gloves to carry out suctioning but not remove them before performing the next task, meaning they do not decontaminate their hands between procedures. The World Health Organization (2009) states that gloves do not provide sufficient protection against infection, and should, therefore, be removed immediately after undertaking any procedure with a risk of exposure to blood or body fluids, and hand hygiene performed.

Infection control audits undertaken in 2016-17 at Great Ormond Street Hospital
(a tertiary children’s hospital in London) had shown that staff’s compliance with My 5 Moments for Hand Hygiene (WHO, 2009) needed to be improved, and that a key reason for hand-hygiene opportunities being missed was the overuse of gloves.

Staff’s perceptions were that wearing gloves provided extra protection and cleanliness; a similar finding had emerged from a study on the use of non-sterile gloves in acute care settings (Wilson et al, 2017). Additionally, staff were not aware that non-sterile gloves may be contaminated with a range of bacteria (Berthelot et al, 2006), which means that, in principle, a decontaminated hand is cleaner than a non-sterile glove.

We decided to create an educational awareness programme for staff around the use of gloves for SICP and transmission-based precautions. Its aims were to:

A core working group of infection prevention and control (IPC) nurses and practice educators produced a briefing outlining the problems identified, the proposed changes to IV drug administration, and the concept of an education and awareness programme.

The proposals were presented to all specialties and clinical nurse specialist groups that would be affected by the changes – that is, all practice educators and the central venous access, occupational health (OH), dialysis, pharmacy and total parental nutrition teams. Gaining their input enabled us to determine variations in practice and learn about the barriers and opportunities to implementing the changes.

The core working group presented its proposals in meetings, including to the IPC committee and trust nursing board, for approval. The lead practice educators then worked with the IPC team to finalise the programme, which includes:

The programme asks staff to conduct a risk assessment to determine in which cases they need to wear gloves when giving medication. In summary, gloves are only needed when administering:

Staff are also asked to risk assess how likely it is that they will come into contact with blood or body fluids, and only wear gloves if this is likely or highly likely.

To conduct these risk assessments, we recommend using the WHO glove use pyramid.

Before launching the programme, we decided we would measure its impact by monitoring three indicators:

We asked the QI team to create dashboards that would help us determine whether the change had been successful in terms of glove usage and reducing the amount of money spent on gloves.
Statistical process control was used to spot significant changes over time. Any step change – whether a reduction or an increase – is based on special rules that distinguish the pattern from normal or common causes of variation. This meant any step-change reduction in the use of gloves after the launch of the programme could then be reliably attributed to the intervention.

Our project – which was called Gloves Off: Safer in our Hands – went live in the last week of April 2018 to coincide with the first glove awareness week organised by the RCN. On 5 May 2018, to celebrate World Hand Hygiene Day, we held a drop-in event in a patient and staff area.

The programme was disseminated across the organisation from April 2018 by the practice education team. Local practice educators were provided with evidence and information on proposed changes, along with frequently asked questions to discuss with all clinical staff. Local guidelines and policies were updated to reflect the changes.

Screensavers were created to highlight the programme, which was also mentioned in the trust’s newsletter and the hospital’s magazine, and presented in all senior-level meetings.

Before April 2018, non-sterile gloves purchased by the trust created around 55 tonnes of waste per year. In the 12 months following the project launch, the number of non-sterile gloves used has fallen by just over 30%, thus reducing the amount of waste by around 18 tonnes.

We have seen no rise in new attendances of staff presenting to OH with skin problems (Fig 2) and have had positive feedback from staff about the condition of their skin as a result of the programme. One member of staff used to have sore hands that would crack and bleed; since she has started to risk assess whether or not to wear gloves, despite working the same shift patterns, her hands are pain-free. 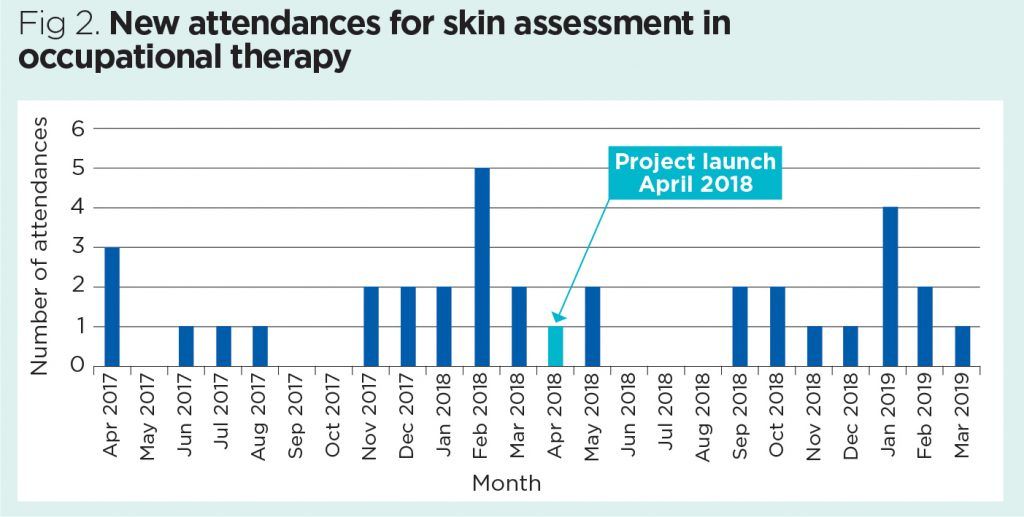 We continuously monitor hand-hygiene trends through our regular audits and create bespoke action plans for each clinical area to continue to reduce glove use. The audits show that staff are making good risk assessments on the use of gloves when preparing and administering drugs.

In all large-scale changes, there are barriers to implementation as well as opportunities. One of the barriers in the first stages of the project was undertaking all the work we had identified in the consultation process. We knew glove use was likely to need improvement in areas other than those we had identified, such as laboratory and domestic cleaning; although this was a challenge, it was also an opportunity for us to move into these areas.

The timing of the changes was also not ideal, as we had had a trust-wide change to our early warning scoring system the month before – as such, staff were a little fatigued with large-scale changes.

Gloves Off: Safer in our Hands highlighted that non-sterile glove use in clinical areas had increased and moved away from the purposes for which the items were intended. This increase not only meant higher costs for the trust and a larger environmental footprint, but also suggested staff did not feel empowered to undertake risk assessments on when they needed to wear gloves to protect themselves.

Initial outcomes are promising and show that changes in clinical practice are possible. We have seen an ongoing reduction in glove use, which suggests the changes are sustainable over time. Box 1 outlines key success factors. Staff were motivated to change their practice because of the positive impact it would have on the environment – something we found to be important to them. We believe the project was also successful because we have been able to measure its effects and feed back to staff on the outcomes, thereby working with them to continue to assess the use of non-sterile gloves.

Royal College of Nursing (2018) Tools of the Trade: Guidance for Health Care Staff on Glove Use and the Prevention of Contact Dermatitis.

Is it wise to enter alternative-to-discipline programs for substance use disorders?

‘We are helping everyone on our register provide better care’